Plate Load Testing is primarily used for the verification of the bearing capacity of the land of the substrate, of the foundation layer and the base layer of the flooring.

It is also not uncommon for Plate Load Testing to be used to investigate the bearing capacity of the soil surface or to the state compaction of granular materials and road surfaces.

Site Testing Services have offices right across the UK which means we can offer on-site Plate Load Testing Testing at one fixed rate no matter where your site is. 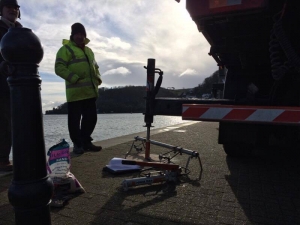 The Plate Load Test consists in transmitting to the soil to be tested and the subsequent increasing load increments, detecting simultaneously the sagging and therefore allows to directly determine a form of deformation or compressibility of the soil. The load transmission takes place via the application of a force by means of a hydraulic system of thrust, of a circular plate. The subsidence induced by the ground plate are simultaneously detected by centesimal or digital data acquisition systems, integral with a frame of reference outside the area of influence of the applied load. Of fundamental importance, in any case, is the use of the proper contrast medium whose mass is a function of the expected load.

Plate Load Tests are generally conducted with metal plates of standard diameter D=300/450/600 millimeters, could be carried out from ground level and inside the wells whose depth is limited only by the size of the jack and related extensions.

Specification for the Plate Load Test

The plate load test shall be carried out at locations as shown in the drawings or as directed by the Engineer using approved equipment. The test should be carried out in accordance to BS 5930 or ASTM D1194.

The details of equipment including the certificates of instrument and copies of calibration charts from approved agency and setup for conducting the plate load test shall be submitted for the approval by the Engineer before commencement of the test.

For bearing plates, three circular steel bearing plates, not less than 25mm in thickness and varying in diameter from 300mm to 1000mm including the minimum and maximum diameter specified or square steel bearing plates of equivalent area. In rock, plates larger than 1000mm diameter may be used, depending on the jointing frequency. As an alternative, three small concrete footings of the size mentioned or larger can be cast in-situ. Such footing must have a depth of not less than two thirds of their width.

The Hydraulic or Mechanical Jack Assembly should have sufficient capacity to provide and maintain the maximum estimated load but not less than 50 tons in any case.

The applied load shall be measured using calibrated electronic load cell. The force measuring devices should be capable of recording the load with an error not exceeding ± 2 percent of the load increment used or 1% of maximum load whichever is lesser.

The Settlement-Recording Devices, such as dial gauges should be able to measure to an accuracy of at least 0.25mm.

Precise leveling optical survey (to accuracy of 0.01mm) with respect to fixed datum to be carried out to measure plate settlement and movements of the reference beam for correction of dial gauges readings.

The reference beam and measuring devices should be protected from the direct rays of the sun and from wind by means of tarpaulins or other forms of shelter, to minimize errors of measurement which can easily arise from these causes.

Miscellaneous Apparatus required, including loading columns, steel shims, and other construction tools and equipment required for preparation of the test pits and loading apparatus.

The plate load test shall be carried out in accordance to BS5930 or ASTM D1194 with the following additional requirement:

The plate bearing load test shall be discontinued if any of the following occurs:

The Contractor shall re-perform the test at location as directed by the Engineer.

The cost and time incurred shall be borne by the Contractor.

In addition to the continuous listing of all time, load, and settlement data for each test, the report shall include at least the followings: